De Dolle Brouwers: an 80s challenge with an international following

Hi there! Did you stumble upon this article as a curious beer lover? Or did you experience an online team building hosted by me and are you enjoying an Oerbier of the box? Or did you receive Oerbier as part of our brewery tour in a box? Well, anyway – you ended up on the right page, and let’s dive into the rich history of this brewery.

Curious how I ended up working with the “De Dolle brouwers”? Well, the answer is rather simple: no Christmas box is complete without their delicious Stille Nacht. Honestly, it’s one of the best Christmas beers I’ve ever tried!

But before I could add them to my box, I had to meet founder Kris Herteleer. It was difficult – with the current health crisis and all. But after a few phone calls, I drove up to their brewery in Diksmuide, and then it hit me right away. This brewery needs to be part of my box!

Did you know that 90% of the breweries have the same brewing installation? Which is the brewkettle for mashing, brewkettles for boiling where to end with the fermentation tank. But Oerbier kept some old tradition. Their equipment took me back to the early 1900s. And Kris showed me their archives – to the early 1830s! But how Kris only started in 1980?

Well, the story kicks off in 1835 when a doctor, Louis Nevejan, established the brewery. When he passed away, the brewery remained in the family Costenoble for the following 3 generations. Unfortunately, there was no fourth generation…
But then some local beer connoisseurs – Kris, his brother, and a friend – thought to themselves that this rich tradition had to continue. And they took over the brewery. And what a brewery it was! It hasn’t changed since the early 20th century: no fermentation tanks or copper brew kettles, but open mash ton, an open cool ship, a cooler plate designed by Jean Francois Baudelot and an open fermentation tank.

An ale amidst a Lager culture

But is setting up a brewery in the 1980s such a great idea? Did you know that between WW2 and 1980 only one brewery saw the light? And that this brewery was Hoegaarden in 1966? No, the 50s, 60s, and 70s were largely dominated by big Lager breweries.

Big, since Lager requires big fermentation tanks to keep the beer at a low temperature. And unfortunately for Kris and his team – lager grew in popularity in Belgium. So starting an ale beer style with a strong ABV was quite the challenge.

But the Dolle Brouwers persevered and Kris’ first brew was labelled Oerbier. They only used natural ingredients to create this “beer of the original” with malt, hops, yeast, and spring water.

One year later they launched Stille Nacht, a duplicate of Oerbier but with a higher ABV since it contained more malts.

And now, 41 years later, De Dolle Brouwers are quite successful (inter)nationally with their traditional beer – even though they produce only 2000 hl/year.

De Dolle Brouwers (“The funny brewers”) have a distinct look ‘n feel. Their logo combines the date of the establishment and a rake – to symbolize the first step of brewing.

And they are funny brewers! During one of our live sessions – one beer lover from The Netherlands dressed up in his cycling outfit of De Dolle Brouwers. And Kris? He was dressed in his yellow suit – including a bow tie!

You’re probably asking yourself why the brewery has this bow tie on their bottles? And why did we have an attendee in our live tasting wearing a cycling outfit of the brewery?

Are you interested in discovering more stories of this brewery? We like to reveal you more secrets in one of our beer boxes.

Visit this page and find out which brewery tours in a box are available and are out very soon.
Do you want to participate in the live tasting where to meet the brewer of the partnered breweries? Then, purchase the beer box at its launching where to receive an invitation to the live tasting.

There’s much more to uncover about beer in Belgium. Discover the story of Slaapmutske beer, another partnered brewery. 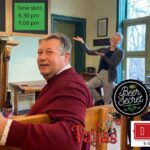 Bruges of Brussels? In a class room or in a brewery?  Discover our unique events of April & May!
avril 4, 2022Liselot 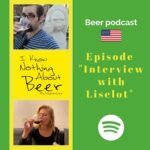 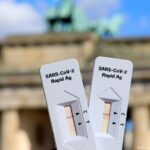